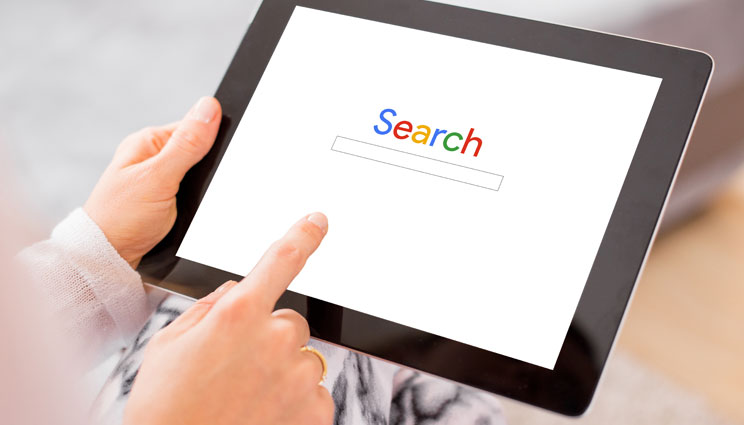 Can you say ‘customer’ in any other languages?

So, what makes everyone so certain that their customers can understand English?

There’s growing evidence showing that, regardless of how many people can speak English (and it’s not as many as you might think), they don’t necessarily use it when on the internet.

Everything on Google these days is local, you can’t search for anything without getting a map showing you your nearest whatever. So what makes people think this is different for languages.

Why then, if you’re listing something for sale in English on a website in English, will Google now show it in search results in Germany. It’s not that Google couldn’t include the listing in German, as Google Translate could translate the listing automatically. But they don’t.

In this instance, Google is looking out for their users – and they know better than anyone that if you search in your language you expect results in your language. So that’s what they provide.

Q: Can you spot anything interesting about today’s top trending searches for Germany? 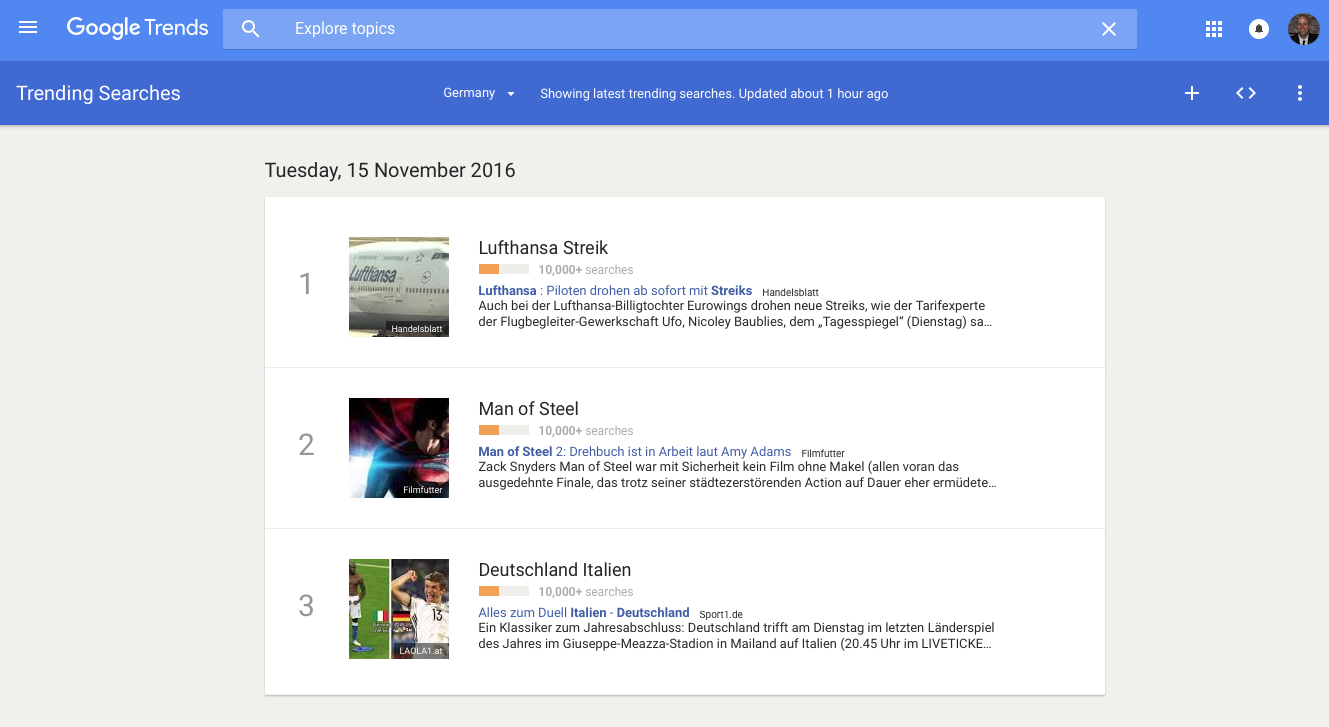 A: They’re searching in German, and the results are in German.

Let’s try one ourselves. Let’s try searching for “International Couriers”, written in German, whilst being in the UK, and see what the results are. 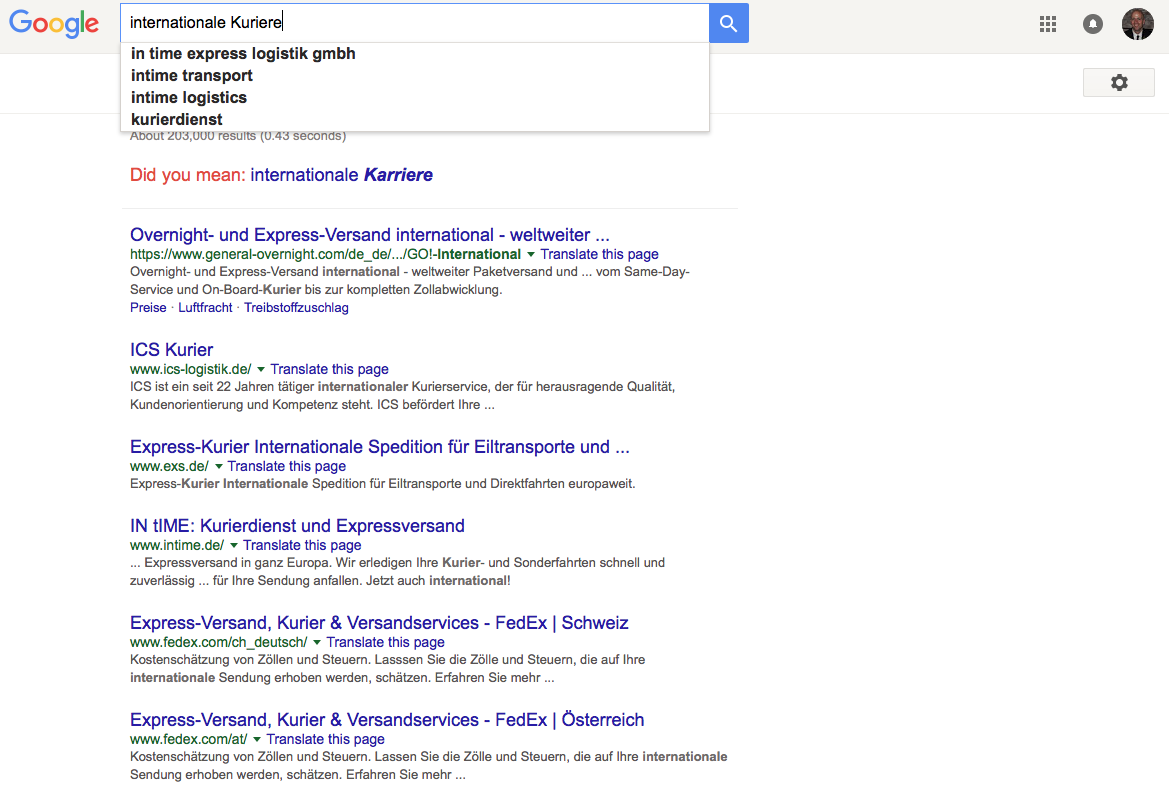 Again, the results are in German.

The elephant in the room

So why do people assume English is the language to use online and nothing else? Where has this come from?

It’s fair to state that lots of people speak English, but let’s not kid ourselves: no matter how big that number might look, it’s not everybody—not even close. The US leads the way in many areas and is one of the largest consumers of the internet, which is probably the basis behind this idea. But the US is not the world, and the world of the internet is growing fast.

So who does speak English?

The internet is now a truly global marketplace, and one language can’t and doesn’t reach it all. 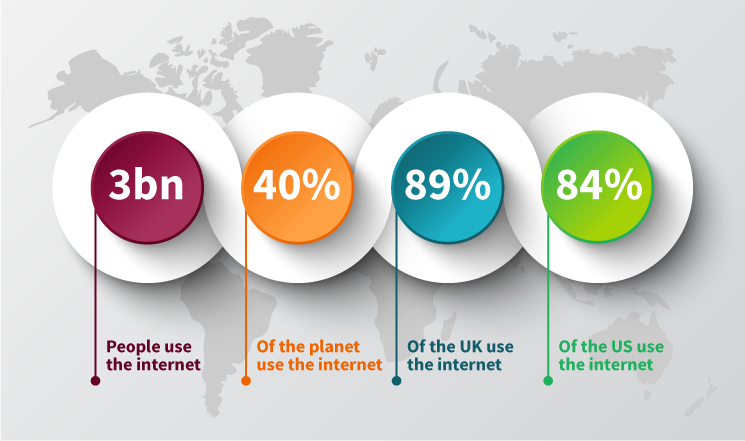 Right now, 3bn people use the internet, but that’s only around 40% of the planet (based on a recent UN report[1]). With 89.7% of the UK[2] and 84% of the US[3] already using the internet, that means most of the English-speaking world is already covered.

So the future of the internet is elsewhere.

What are they speaking? 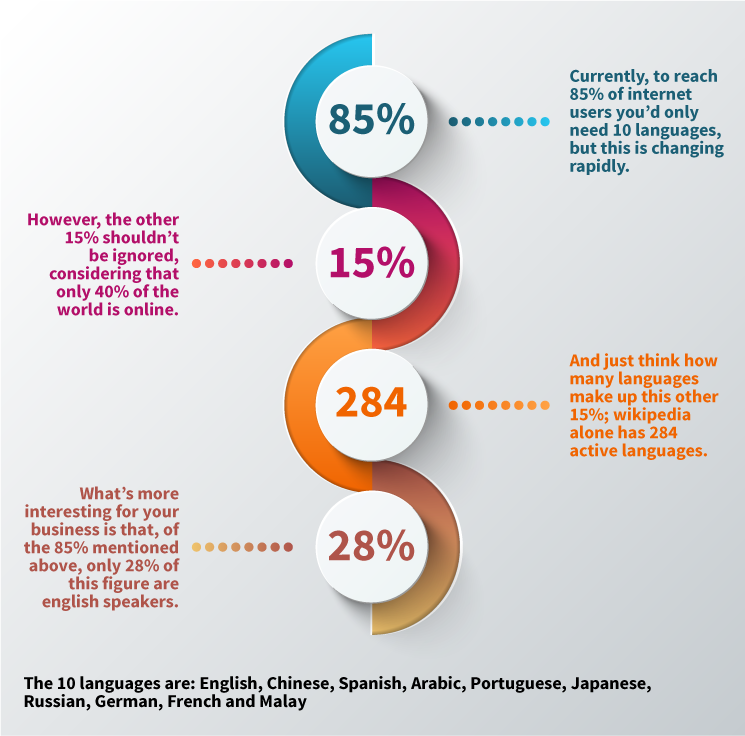 To some, the above graphic, might make this seem like a decent enough market size, but that still leaves 3/4 of the internet that you’re not reaching, and this ratio is shifting fast.

Since 2000, internet use has grown massively, and the growth in non-English speaking regions has dwarfed those in English.

Growth of internet use by language since 2000:

One key issue currently facing the internet and its users is the content available. Too many businesses and users have focused on using English alone, without looking at the limits to its value.

From a business perspective, this is frightening and this disparity is only likely to grow. So, you have to ask your business: can you afford to ignore and not cater to over 70% of your potential customers?

This sounds like a rational assumption, considering the volume of content that’s in English. Surely people are using it, or else who are people producing it?

The simple facts point to the opposite being true: 72% of consumers spend their time online in their own language[10].

But this is simply common sense, isn’t it? And the figure is probably only as low as 72% due to many users not being able to find the content they want in their own language, even when they look.

And, when it comes to purchasing, this figure increases: just 1 in 5 people buy in another language. Again, this is common sense, right? You’d want to know what you were buying before you confirm your order, and this is true anywhere in the world.

But my products are on Google in those countries?

They may well be. But let’s face facts: the above proves that people use the internet in their own language – and that should be obvious, because we all do. So, why do we continue to assume they’ll search in English?

Even if you know for a fact that people in France or Germany can simply search for your product and find it (as long as they do it in English), the actual chance of them doing that (in English) is not as high as you think.

This has been proven. And many of Europe’s largest, most profitable, and most diverse markets are the least likely to do so. 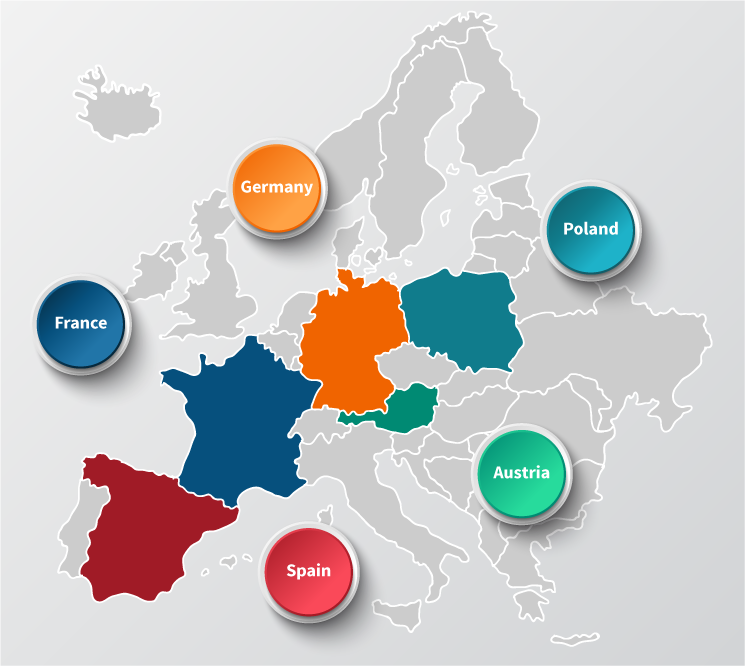 The list includes 3 of the biggest economies in Europe. And users in all these countries are, at best, only 29%-32% likely to ever look for content in English[11].

But that’s okay because 70% of Malta will use English, right?

The reality is that, by not having your content in their local languages, you’re missing out on selling to 70% of these three biggest markets in Europe, and that just for starters.

Which is probably because their economies and markets are already big enough to not bother with you, if you don’t give them a reason (in their own language) to do so. They can find what they are looking for locally instead.

So what languages should you sell in?

This comes down to knowledge and understanding of what you’re trying to sell. You need to look at the available markets and their potential.

The key consideration here is buying power versus online share. Just because a country has lots of people online doesn’t mean they’re buying.

10 Largest e-commerce markets in the world compared to online share: 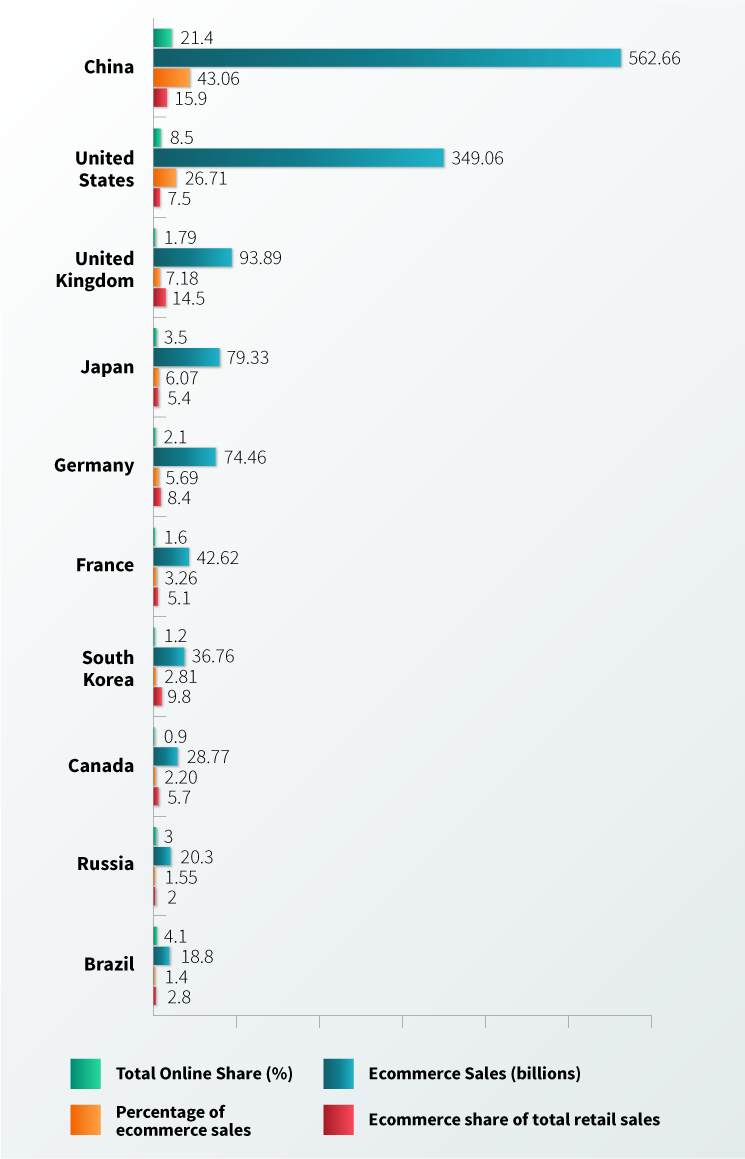 As you can see, some markets are a lot more beneficial than they might initially look once you look past their simple online presence. Yes, China and the US are big, but that’s not the only factor at play here.

Consider it another way: India has a 13% share of the world’s online arena (sitting in 2nd place above the US) and yet doesn’t rank in the top 10 for e-commerce. While Germany only has a 2.1% share of online, but 5.69% share of the e-commerce market.

The e-commerce power of languages in the EU

As these figures suggest, there’s a lot of potential purchasing power in Europe. But that again needs to be considered against its diversity. Don’t just go for every language, as some might not be beneficial to you. 90% of the Netherlands can, and do, use English when buying online[14]. While the buying power of some other markets might just be too small (for now anyway).

So you’ll need a considered approach when choosing the right languages and markets.

If you want to access Europe’s huge combined buying power, and want a simple language strategy, here it is…

One simplified way of looking at Europe is with a North/South Divide. Northern European – i.e. the Netherlands upwards, so think Scandinavia – are more likely and willing to use English online. Whereas the countries South of that are much less likely to use it, as we saw above with Germany, France and Spain being among the least likely.

However, all major countries in Europe – even Scandinavian countries – have a core set of users who will never be willing to use another language online, which currently sits at around 40%. This is not an insignificant amount. So, initially you might be able to use English more effectively in the North, but by no means should this be your end solution.

The future’s all about conversation

The above is simply a snapshot of today, but what next?

Well, if Google’s recent actions are anything to go by, language is becoming king. They are currently driving hard towards a fully semantic use of language[15]. But what does this mean?

Put simply: they want the internet, as well as how it communicates with and understand users, to become more natural – conversational even. And the reality of this is that ‘conversational’ means local languages, especially when coupled with Google’s love of local that was mentioned above. That’s generally how humans converse. And there’s a reason for this: it is what people want.

The facts are on Google’s side here:

That’s a lot of people not even bother to look at your site, even if it does have what they searched for, compared to how many would if your site spoke to them in their own language.

It’s also worth mentioning that Google are possibly driving this conversational approach whilst keeping an eye on the rise of voice searching. Because people are even more likely to use their own language when speaking.

The need for local language is more important than ever. With Google and the language it’s using becoming even more local, yours needs to be too.

Or find out about the multilingual services
we provide for e-commerce here.